The Allied Command had determined that the best site for an invasion of Normandy in World War II was the stretch of Normandy beaches in the Bay of the Seine. A knowledge of the tides would prove critical for planning the successful invasion – the conditions had to be right to give Allied troops the best chance of success.

All the Admiralty tide and tidal-current predictions for the war effort were produced by Arthur Thomas Doodson at the Liverpool Tidal Institute using machines operated from two separate rooms at Bidston Observatory (to safeguard the capability in case of damage by bombing). The 53-year-old Doodson was the world’s leading authority on tidal prediction. He used two tide predicting machines: the ‘Bidston Kelvin’ machine, built in 1924 for Doodson’s use, and the ‘Roberts Légé’ machine made in 1906 and later also acquired by Doodson. Predictions for all the ports in the Admiralty Tide Tables were completed two years ahead of time. But the machines were also required for many additional predictions for wherever around the world the Allies needed them.

Harmonic constants needed for making accurate tidal predictions for the landing beaches were supplied to Doodson by the superintendent of tides at the Hydrographic Office, William Ian Farquharson – a 43-year-old commander in the Royal Navy. He was based in Bath, and because of extremely tight security, could not tell Doodson that the landings were to take place in Normandy. He exchanged coded letters and telegrams with Doodson at Bidston, and he labelled the coastal location to which a particular set of harmonic constants or tidal data belonged with a code name.

Doodson ideally needed accurate harmonic constants calculated from tide data measured at or very near each landing beach. But the British had no such data. The only harmonic constants they had were for the two French ports either side of the beaches: Le Havre to the east and Cherbourg to the west. Interpolation would not work, because shallow-water conditions varied from one location to another. Very accurate shallow-water tidal data from the beaches themselves were needed, so British teams in small boats and midget submarines carried out several secret midnight reconnaissance missions on the enemy beaches which yielded a few tide and current measurements.

On 9 October 1943, Farquharson sent Doodson a three-page handwritten letter marked “MOST URGENT”. It included 11 pairs of harmonic constants for the location code-named “Position Z.” He asked Doodson to produce hourly height predictions for four months commencing 1 April 1944. “The place is nameless and the constants inferred,” he wrote. “There is in fact very little data for it. I am gambling on the inferred shallow-water constants giving something like the right answer. It is still not known how Farquharson came up with those harmonic constants, but they compare well with those derived from modern hydrodynamic tide models of the English Channel. Doodson put Farquharson’s harmonic constants on his tide-predicting machines to produce the tide predictions for D-Day. (Years later Doodson admitted that he had guessed from those harmonic constants that the Normandy beaches were the intended landing site.)

Doodson’s tide predictions were then modified at the Hydrographic Office for each of the landing beaches and provided to the military planners and commanders as tidal and illumination diagrams, which combined the tide predictions with additional information about moonrise, moonset, sunrise, sunset, and various degrees of twilight. Three days in June 1944 met all the Allied requirements. The only potential dates for “D-Day,” invasion were: 5, 6, and 7 June.

A date of 5 June was selected, but bad weather ended up delaying the plan until a more favourable window the following day – and this turn of events contributed to surprising the Germans. Rommel had concluded that the weather was too bad for an invasion, and also believed that the Allies must come at high tide, so thought the 6 June tides would not suit them and had left his office to spend time with his wife on her birthday. 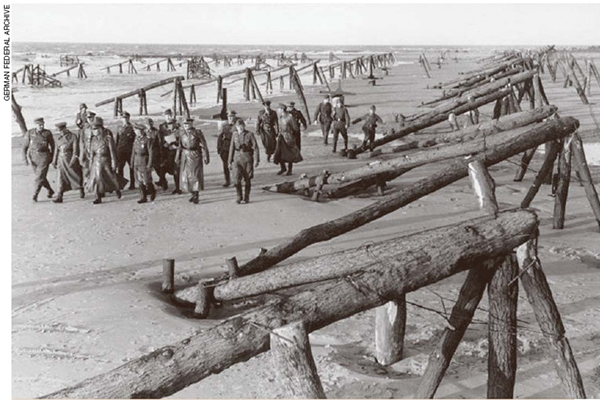 The landings took place on 6 June 1944 and the tide predictions proved to be quite accurate. The operation went smoothly, with one key exception: an hour after low water, American demolition teams landed at Omaha Beach (the only beach on which the German defenders had not greatly reduced their readiness because of the weather and tide conditions). They were tasked with blasting channels through the beach obstacles, but German gunfire from above the beach took a heavy toll, and more than half their engineers were killed in the process. However, without the accurate knowledge of the exact timing of the fast-rising tide, things would have been even worse. At Utah, the westernmost of the five invasion beaches, American demolition teams had cleared the entire beach of obstacles by 8am, with only six engineers killed and eleven wounded. An unexpectedly strong tidal current actually helped the invaders by sweeping their landing craft 2km southeast of the intended landing spot, to a stretch of beach that transpired to be more lightly defended.