How do the Moon and Sun control the tides? How do we use this knowledge to make predictions?

Tides are very long-period waves that move through the oceans in response to the forces exerted by the moon and sun. Tides originate in the oceans and progress toward the coastlines where they appear as the regular rise and fall of the sea surface.

The water masses of our oceans carry heat, oxygen and nutrients across seventy percent of our planet, so an understanding of currents and tides is important for many reasons. A knowledge of the tides has always been fundamentally important for safety and for commerce and trade. Mariners need to know the time of high water so they can safely bring their ships into port without running aground, and those making a living from the coast – for example, people fishing on low-water mudflats – need to know when to leave before the tide comes back in. An understanding of tides is also crucial for coastal management, and for investigating features and any patterns of change in the marine environment.

The Sun also pulls on the water in the ocean, and generates tides every half of a solar day (exactly 12 hours). When the effects of this solar pull align with those of the pull of the Moon, we experience spring tides. When they are pulling at right angles to each other we experience neap tides. A spring-neap cycle takes place over a fortnight.

However, this is a very simplified description of the tidal forces rather than the tides themselves, which are the response of the ocean basins to those forces. As a result, it transpires that the spatial patterns of the real ocean tides are much more complex than those described above, although the temporal characteristics of the tides (primarily twice a day around the UK) are much the same. 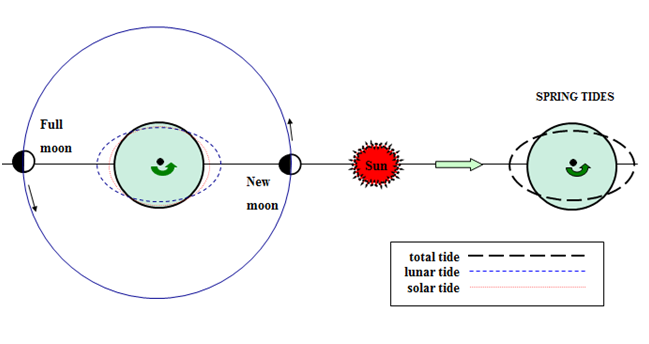 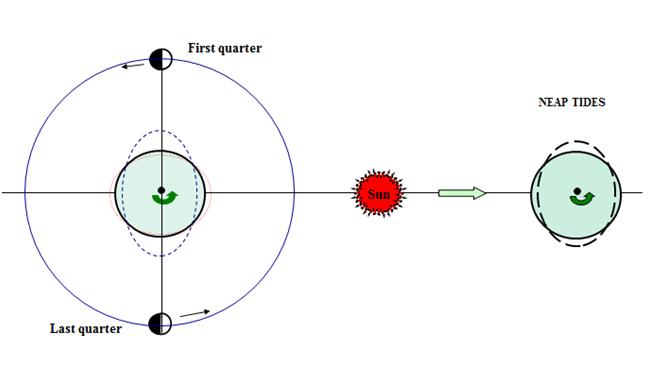 In many locations, the tidal pattern will not match the diagram above. The land masses on earth and a number of other factors introduce layers of complexity. There are places with only one tidal rise and fall each day, many with multiple peaks, and still others which experience none at all.

Despite these complexities, with enough recorded data on the rise and fall of water levels at a given location, it is possible to analyse the information and obtain a repeating pattern which can be used to tell you expected water levels there at any time in the past or future. Harmonic analysis breaks down an observed tidal curve (no matter how complex) into a series of regular sine wave components. When the amplitude and frequency of enough of these components is known, the original curve can be reproduced for any point in time.

The tides have a longer history of continual research than any other aspect of what is now called physical oceanography. The connection between tides and the movement and phases of the Moon was always clear, and early mariners and fishermen observed the time interval between the Moon's highest ascent above the horizon and the time of the next high water to develop simple prediction methods. They knew that the tidal range varied throughout the month, and increased toward times of full or new Moon.

Exploiting the harmonic method for tidal analysis and prediction requires lots of data. Frequent water-level measurements must be made (usually hourly) for several weeks. The longer the data series, the more harmonic components one can quantify and the more accurate the resulting tide prediction capability would be.

How do you measure the height of the sea surface?

Many different technologies and methods have been used. Until the early 19th Century, sea-level measurements were made using tide poles or staffs. The earliest form of self-recording tide gauges were introduced in the UK during the 1830s. These mechanical float and stilling well gauges became the primary means of sea-level measurement for over 150 years, and continue to operate at some UK locations today. However, they are generally auxiliary systems to newer pressure gauges. In recent decades, many countries have adopted acoustic gauges or radar gauges as their standard means of sea-level measurement.

Developments in satellite technology have also played a big part in enhancing our ability to measure water heights - both in transmitting data from measurement stations, and in actually making measurements, as with TOPEX/Poseidon satellite launched in 1992 to record the changes in sea level and continued to the present day by the JASON series of missions. Oceans are not the only part of our planet which are affected by gravitational forces, and satellite observations have also helped the study of earth tides – the displacement of the solid Earth's surface caused by the gravity of the Moon and Sun.

Tide Predicting Machines provide a mechanical solution to the problem of summing values of component waves of different sizes which travel at different speeds. They are analogue computers which use the motion of wheels and pulleys to simulate the rise and fall of the ocean tide. Settings of each wheel are programmed to match the amplitude and phase of different components of a tidal pattern. A wire band connects all the wheels and serves to sum their motion. A pen connected to the wire will draw the resulting tidal pattern.

Records from a tide gauge at any particular port were analysed by Doodson’s methods and the resulting analysis would be used to ‘program’ a tide predicting machine. The machine could then be used to predict the tides at that port for any desired date.

Computed predictions from these machines, and their modern digital equivalents, are used to help inform navigation and better understanding of our oceans. The astronomically-forced tides are not the only influence on water surface height; meteorological effects such as air pressure and strong winds make an impact as well. Using supercomputers these are often predictable as well, but generally on much shorter time scales. Combining tidal and meteorological information through numerical modelling provides a powerful forecasting tool which can help those operating offshore, and to protect our coastal communities through early warning systems for coastal flooding.