Tide Predicting Machines are analogue computers which simulate the rise and fall of the ocean tide. They are carefully engineered devices in which each harmonic constant of the tide is represented by the motion of a pulley wheel, set to move at the appropriate speed; a wire wound over several of these wheels sums their motion to give a representation of the total tide for the programmed location. 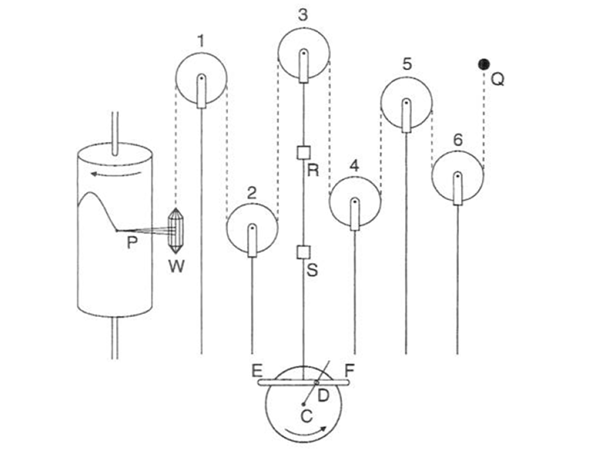 These machines were built during the period 1872 to 1964. Only around thirty were ever made – they were expensive and complex to produce, and during the 1960s digital computers became capable of performing the same calculations far more efficiently.

The machines were used in locations across the globe. Most were built in London – supervised at Bidston in Northwest England by Arthur Doodson. The majority are made of brass with many wheels and pulleys, but they are all different and capable of simulating tidal patterns with different levels of accuracy.

To simulate the tide for any location, the process is


This approach can be used to calculate heights of past, present and future tides. During the 1960s, digital computing began to be used to perfrom the same calculations. At Bidston (the centre which became part of today’s NOC) tidal science kept pace with developments in computing. Numerical hydrodynamic modelling became a key part of the work of the organisation, and remains so today.